Awareness is everything. Know when and how you are vulnerable.

CYBERCRIME IS RISING AT AN UNPRECEDENTED RATE

Awareness is everything. Knowing when and how you are vulnerable can make a big difference in your response time and actions. GroupSense helps increase your awareness with our Targeted Attack Campaign Monitoring service.
GroupSense monitors dark web forums and marketplaces for client mentions. Targeted attack campaigns are coordinated, direct mentions of client brand names, infrastructure or other aspects of their digital monitoring profile. When relevant content is identified by GroupSense’s systems and analysts which pertains directly to their profile, GroupSense notifies the client via an Advisory Alert.

GroupSense detected the creation of attack infrastructure that would have led to a targeted phishing/whaling attack on a client. GroupSense helped the client defend against an account takeover and business email compromise.

Save Time and Resources

Reduce Risk and Stay Ahead of Emerging Threats 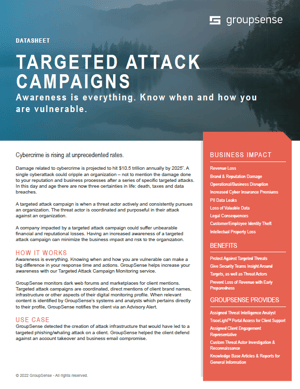 Learn more about how GroupSense can help with compromised credit cards.