Users quickly adopted the cloud storage tool Dropbox at the start of the COVID-19 pandemic to alleviate file sharing issues and facilitate group work. Updates to Dropbox Spaces, a project management tool, reflect this shift, easing communications for remote work.1 The file-sharing company seeks to enhance collaboration and information-sharing within a distributed workforce, both now and in the future.

As Dropbox and other businesses continue to adjust to new workplace requirements, threat actors are increasingly leveraging their services for attacks.

A 260% increase in using encrypted Secure Sockets Layer/Transport Layer Security (SSL/TLS) traffic to hide cyber attacks occurred in the first nine months of 2020, according to security company Zscaler.2 More than 30% of all SSL-based attacks hide in collaboration services like Dropbox.3 Threat actors hide malware inside encrypted traffic, enabling their attacks to bypass detection. Dropbox relies on such encrypted traffic to protect data in transit, yet is exploited by these hidden attacks.

There are numerous reports of threat actors of varying motivations and sophistication utilizing file-sharing services to host and disseminate malware. As the COVID-19 pandemic continues, information sharing and virtual collaboration provided by Dropbox will remain a crucial factor for remote work and resulting threat actor abuse. 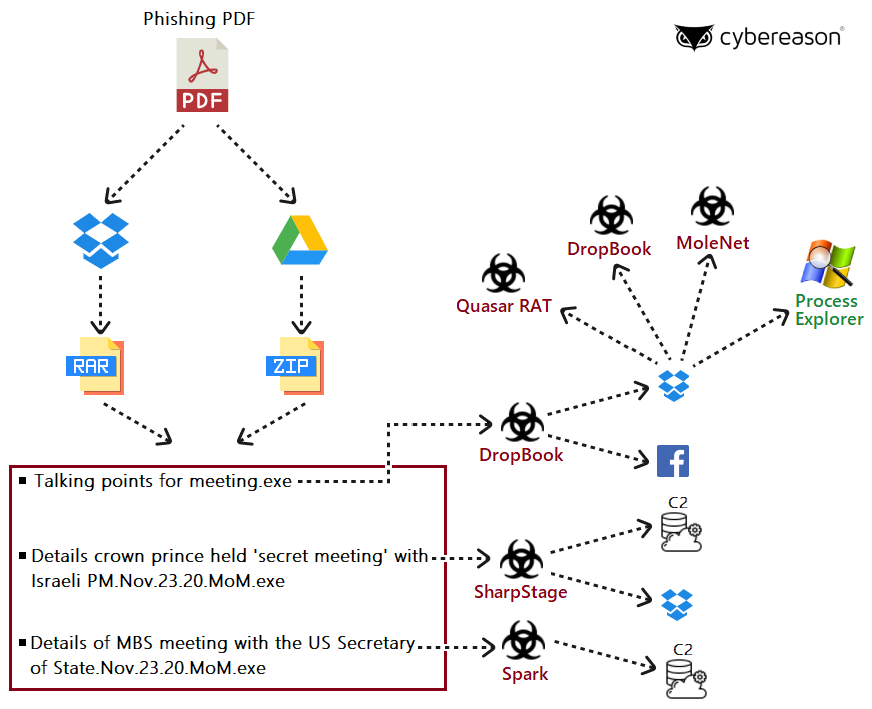 Dropbox’s reputation as a leading file-sharing service makes it a popular target. Its legitimacy allows threat actors to appear authentic to targeted users, which lowers their usual levels of alertness or wariness. Dropbox provides a platform for C&C communications, allowing threat actors to evade detection during their campaigns.

Since the beginning of 2021, five users have submitted fifteen suspicious emails purporting to target the Dropbox brand to the phishing tracking service PhishTank.7 GroupSense verified many of these submissions as phishing emails, and the actual number of such emails is likely significantly higher than those reported.

Threat actors have been leveraging Dropbox Transfer with COVID-19 relief phishing lures to redirect users to credential harvesting websites.8 Evoking a sense of urgency to the user that file transfers will expire can influence victims to click and download malicious content. 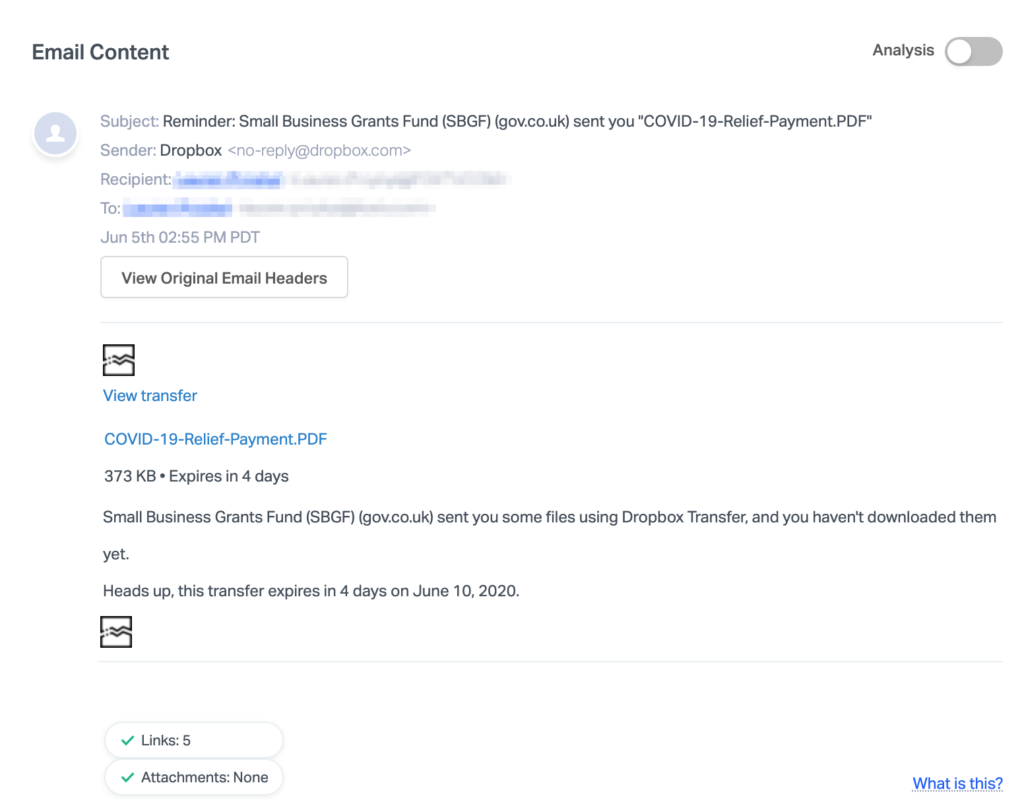 The breach continues to attract interest in underground forums. As recently as February 2021, users were replying to a post offering the database on RAID Forums in 2016.

A zero-day vulnerability in Dropbox was discovered in 2019 by security researchers Decoder and Chris Danieli which allowed threat actors to gain permissions reserved to the privileged SYSTEM account in Windows 10 OS.12

These vulnerabilities are comparatively rare and less likely to present a threat to businesses than phishing and malware distributed via Dropbox.

To protect against these vulnerabilities, GroupSense recommends users ensure they have automatic updates enabled for Dropbox desktop and/or mobile applications or that users manually and periodically update the application. Detailed instructions are available on Dropbox’s site.

GroupSense recommends users engage in phishing awareness training, including examples of phishing campaigns mimicking popular file-sharing services such as Dropbox. Training should highlight that received legitimate emails, including those from no-reply@dropbox.com, can contain malicious links or attachments.

GroupSense additionally advises blocking leaked Dropbox email addresses from the 2012 breach, as these are still receiving attention from threat actors and could be used to host and disseminate malicious content.

Other reputable cloud storage and file-sharing services like Microsoft OneDrive or Google Drive may better suit your business. Regardless of the chosen service, threat actors will still take advantage of all encrypted SSL/TLS security measures.

Businesses should consider limiting file transfers to only one sharing service across the company. This can mitigate phishing and malware distribution that leverage other popular file-sharing sites not approved for use.