Think Before You Share: How Tweets Fuel the Infodemic

Twitter is a fun and easy way to engage with pop culture and maybe even spark a spirited discussion. Many of us on twitter can retweet/share without thinking or researching what tweets truly say, causing them to spread quickly to a larger audience. But, the sad fact is, some tweets might end up being misinformation or disinformation, especially politically-oriented tweets.

In this day and age, when it seems everybody is trying to influence your vote, it’s important to dig just below the surface when it comes to Twitter. First, so you know the facts behind the tweet and second, so you yourself don’t become guilty of spreading misinformation or disinformation. 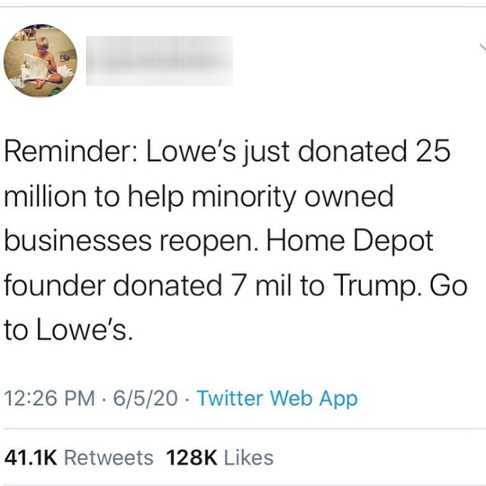 It’s obviously a popular tweet, retweeted over 41,000 times since it was posted on the 5th of June 2020. With over 128,000 likes, that’s a lot of attention for a politically-oriented tweet.

The tweet implies the reader should boycott Home Depot, a popular do-it-yourself home-improvement supplier apparently supporting Donald Trump in the 2020 election cycle, in favor of Lowe’s, which appears to be a benefactor of minority-owned businesses. The statement “Lowe’s just donated” implies the donation came in late May or early June. “Home Depot founder donated” similarly sounds like it happened recently, within the past few days or weeks.

Both things stated here are correct, but their juxtaposition in this tweet functions as misinformation. A little research - through a quick Google search, no less - shines a light on the facts.

Marcus retired from his position as Home Depot’s CEO in 2002. Nothing he does since then represents the company, so mentioning the founder of Home Depot in the context of this tweet serves as misinformation. It is fundamentally true that he donated $7 million to the Trump campaign, but it had nothing to do with Home Depot. Just like any individual, Marcus is free to donate to whomever he likes. Unlike most individuals, he has amassed a fortune because he founded an incredibly successful company, from which he was able to comfortably retire nearly two decades ago.

Political action committees run by both companies donate to both parties.

Based on these figures, both PACs - and therefore both companies from a corporate giving standpoint - overwhelmingly supported Republican candidates in the 2016 and 2018 election cycles. So far in the 2020 election cycle, Lowe’s has continued to favor Republican candidates by a wide margin (68% R to 32% D), while Home Depot has a more even distribution of its PAC funds (56% R to 44% D).

In this light, this tweet’s attempt to shame readers into boycotting or at least avoiding Home Depot in favor of Lowe’s easily qualifies as misinformation.

Knowing Lowe’s - through LISC - has increased their grant funding for small businesses, primarily those in rural areas or owned/led by minorities or women, makes the data in the initial post inaccurate. Tweets can last a long time, reposted and shared across platforms for weeks or months and even brought up again years after they were initially posted. The data in them can easily be incorrect, which functions as another form of misinformation.

No matter your personal political leanings or beliefs, it is important to view all such tweets with a bit of skepticism. Undertaking a minimum of research into the information in tweets such as this one can quickly uncover misinformation, whether it is intentional or simply a function of time.